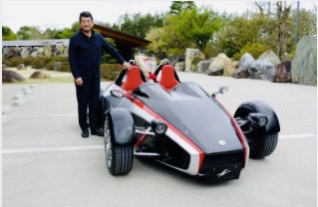 KEN OKUYAMA DESIGN’s sports car “kode 7” (kode Seven) was delivered to the Hirosawa City on April 6, a theme park in Chikusei City, Ibaraki Prefecture, which exhibits railway cars and aircrafts, and Okuyama’s interview was published in the ”Ibaraki Shimbun Cross Eye”. “kode 7” is a two-seater open car with a displacement of 1600 cc and a body characterized by red and silver stripes based on black, and will be exhibited in the Hirosawa Museum of Art (designed by Kengo Kuma and Associates） which opened in January this year.