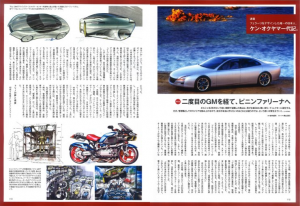 The sixth article of the series  “The Only Japanese Who Designed Ferrari, Ken Okuyama’s Life Story” appeared in the May 2022 issue of ENGINE on sale March 25th.

The sixth article, “To Pininfarina S.p.A. after my second career at GM,” Okuyama, who returned to GM as a director two and a half years after his transfer from GM to Porsche, experienced his first day as a manager at the age of 33 in his seventh year as a member of the workforce. It also describes how he aimed to master his career, and how, after joining Pininfarina, he was recognized for his talents as a designer but had to work hard in a completely different environment from the one he had been in before.